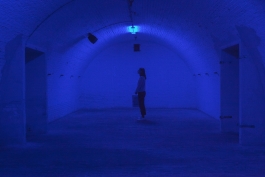 Canaries, installation, blue TL lights, sound, speakers, 2019
The new work “Canaries” was shown at the Fort Ruigenhoek, nearby Utrecht. The old fort, originally a landmark intended to safeguard the Dutch waterways from possible threats is now being transformed for a temporary exhibition.

The site-specific installation “Canaries” is an inquiry and exploration of the given space and further draws upon concepts of protection and vulnerability. Entering the installation, the room inside the bunker is closed off from natural light. Instead of being in darkness, the room is filled with an artificial blue lightening. The room is left blank, only two speakers are installed on either side of the ceiling. The sound they project are audio recordings from people taking a shower, filling the space with sounds of flowing water mixed with voices sinning and humming various songs.


A commentary by Silke Xenia Juul

Behind the thick walls of the old fort, I find myself in the innermost chamber entrenched in blue light. The contrast of the cool room, both in temperature and hue, with the sunny, green surroundings outside is not lost, and it becomes unclear if these thick walls shelter the visitors inside the room from the dangers on the outside, or if they act to contain what is inside, as a means of protecting the surroundings. The space seems at once intimate and public. Claustrophobic, yet safe. One is met with a presence of in-tension, yet an absence of physical objects. The emptiness takes up the entire space, as the sound of persons singing under falling water juxtaposes the dry and isolated physical context. If you stand here long enough, it almost feels like the blue light takes on the physicality of the sound of water and song, bathing the space and insisting on voices, yet invoking silence.

In cinema, showers are predominantly portrayed in relation to scenes of violence or those of a sexual nature. Naked, vulnerable, the sensory overload of both the touch and trickle of water onto body and tile. The muting effect of running water — isn’t this why people otherwise uncomfortable with singing, still can be obliged to hum along to a melody in the shower? What happens under the tap stays there.

Except not in the case of ‘Canaries’: different voices sing different songs, as the artist transports the solitary shower stall to the bunker bathed in blue. 'Sag mir wo die Blumen sind', a German version of the anti-war song ‘Where have all the flowers gone’, washes into lay me down in sheets of linen, as the promises of the shower-rendition of Elton John’s ‘Tiny Dancer’ alludes to an intimacy and two-someness that disappears with people talking without speaking/people hearing without listening/people writing songs that voices never share/no one dared/disturb the sound of silence, as a humming defies the prophecies of Simon and Garfunkel’s 1964 hit song are being disproved, because it is exactly a disturbance of silence, a subtle rupture of privacy, a communal, yet individual vulnerability that the work exposes, as the voices enter a conversation with the brute architecture of the bunker, one of protection and exclusion, as well as with the visitors; the silent bodies moving through a space of bodiless sounds.