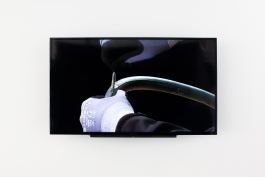 The video verb rather than noun shows the act of fixing and repairing a punctured bike tire and is focussing on the gesture of the hands—drawing attention to one’s sense of touch and contact, the act of leaving an impression. The membrane of the tire is the border between the inside and the outside, a kind of rubber skin.

The title verb rather than noun emphasizes that words such as care and love are not solely a definition (noun), but instead that they are actions. Actions are ephemeral, they are not fixed, they can be questioned and revalued. As the author, professor, feminist, and social activist Bell Hooks describes in her beautiful book All About Love: “Attention is an important resource”—attention is an act of will, care, and respect." 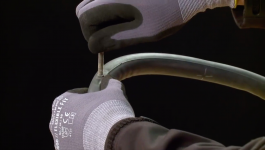